Over the last few days there has been so much soul-searching about HOW DID TRUMP GET THE REPUBLICAN NOMINATION OMG!  How did the pundits get it so wrong?  What is HAPPENING?

There is this idea that the pundits are completely separate from the voters.  The voters are in their little zoo, wandering around and making decisions and casting votes, and the pundits observe from afar, making notes and predictions.

I think the reality, especially now, is more complex and intertwined.  The pundits don’t seem to realize they’re right in there with the voters, and that the voters are taking note of what the pundits have to say.  (To a greater and lesser extent, of course.)

So rather than being as simple as the pundits getting things wrong — misreading the tealeaves — I think the pundits sometimes actually help shape what’s going on.

Especially, I think the Trump situation went something like this.

It’s summer of 2015 and the Republican voters hate all of their options.  There isn’t a single one who they feel like they really could get behind.  Donald “You’re fired!” Trump is a hoot but it’s not like he could actually get the nomination, of course.  But hey it’s funny to say you’re supporting him, when asked by pollsters and such.  Ha.  Take that, establishment! 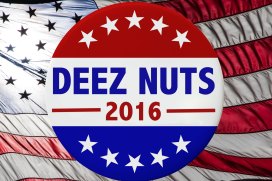 Lots of people had the same idea.  Some of them went the “Deez Nuts” route — same idea, different target.  But since fifteen-year-olds can’t actually become president, that led to — what if Trump actually got the nomination?  That would be hilarious.  The pundits are saying it’s impossible.  Oh yeah?  Just watch.

This is where things really took off, IMO.  The first phases had to happen so the rallies were big enough to be powerful and “winning.”  But then the rallies became a safe space for a certain kind of person who was tired of having to be so CAREFUL all the time.  So much to tiptoe around to avoid being called a sexist or a racist or a homophobe.  At Trump rallies, they found their people, and it was glorious.  They could be sexist or racist or homophobic and not only would they avoid censure, they would get encouragement!

That was heady.  But there were more layers than that, too.  It’s not that the rallies are only for horrible people, or for people who are only horrible.  There was also a sense that Trump was listening to them in a way that other candidates were not — this is how you see people who say that they support Trump OR Bernie.

At any rate, the rallies started to shift Trump from the Deez Nuts category to the serious contender category.

The punditocracy was not having that.  Trump?  A serious contender?  HAH!  And the irony is, I think this blatant contempt helped solidify his standing.  This sneering from the elites — the media, the Republican establishment, the establishment in general — strengthened everything that was going for him.  The outsider cred, the authenticity, the scrappy underdog-ness… even if he committed something that in most presidential campaigns would be considered a “gaffe,” for Trump it was a feature, not a bug.

That’s where we are now.  And I think the previous phases have shown us that the more the elites try to tell the great unwashed not to be so stupid, the stronger Trump gets.

I’m of the firm opinion that Trump backed into this and that there is no grand plan or evil scheming — just a serendipitous combination of timing and persona.  I’m not even convinced he actually wants to be president — how boring! — but I’m not sure how he backs out of it at this point.  Perhaps he’s just planning to foist all of the governing on to a vice president if he wins?

At any rate, I think the A #1 thing for us to do is, while taking him seriously, don’t panic.  Don’t give him the oxygen.  Don’t do things like endlessly mock this:

Sure, it’s stupid.  But what does it really matter?  Despite early squawking about how the Trump Tower Grill doesn’t even serve Taco Bowls, there is another place in Trump Tower that actually does serve Taco Bowls on Cinco de Mayo.  I think Kevin Drum has it right re: how this will play with Trump’s supporters — “a perfectly sincere appreciation of Mexican culture.” Banning Muslims and calling for mass deportations is the actual scary stuff.  Stick to the substance, not the style.

He’s an idiot.  The only way I see him winning the election is if the other side builds him up as such an anti-them that a coalition of the racists, the working poor, and the “damn he’s got balls haha” bros will eke out a majority.  So, let’s chill a bit and just let him do enough scary stuff to scare them away.